3rd Test, Day 3: Why Michael Clarke may find himself short of allies 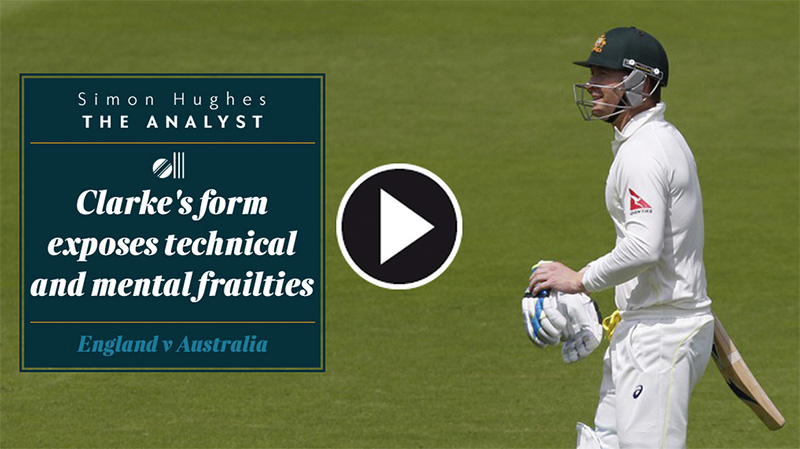 It is easy to perceive disunity in a team that has just lost. But Australia have seemed like a disparate team since they arrived on these shores. There were rumours of various factions within the side at the start of the series, of New South Wales cliques, of one or two disgruntled older players, and they have never seemed like a unified group.

Part of the blame for that must lie with the captain. ‘If a fish is bad, look at its head,’ the saying goes. Michael Clarke has not looked right all series. At Cardiff he spent inordinate amounts of time practicing on his own, and often appeared disengaged as England took hold of the game. He had only a bit part to play – winning the toss! – in the victory at Lord’s as Chris Rogers, Steve Smith and Mitchell Johnson seized back the initiative.

Here at Edgbaston he has seemed a man apart, netting endlessly but fraternizing more with older ex-colleagues now part of television commentary teams rather than his teammates, and there was more mystification than explanation from Johnson after a series of odd bowling changes Clarke made in England’s first innings. The fast bowler was less than supportive.

But Clarke’s batting is the biggest worry. He admitted it himself to Michael Atherton straight after the game. ‘We are playing with 10 men,’ he said with brutal honesty, and didn’t discount the idea of slipping back to number five. That he has not made a significant score this year is one thing (he is averaging 24 in 5 tests since Christmas with a highest score.) But the nature of his innings and the manner of his dismissals would be a serious concern. He looks rigid and anxious at the crease, camped on the back foot against the quicker bowlers – especially Stuart Broad – his feet apparently stuck in chewing gum.

He managed 10 in Australia’s first innings here, but 8 of those were off the edge from two outswingers from Jimmy Anderson. After the second, Anderson gave him a piece of his mind – the usual bit of invective from a fast bowler. But Clarke, far from an irate retort, actually agreed with Anderson. ‘You’re quite right it was a crap shot!’ he said, as umpire Aleem Dar attempted to intervene fearing a confrontation.

His innings did not last much longer as he appeared to lose sight of a fuller ball from Steven Finn and had his stumps re-arranged. In the second innings he was jumpy at the wicket, and often appeared to be searching for the ball as Finn found a probing line around off-stump. He had no presence at the crease. He looked as if he was expecting unplayable delivery. Bowlers sniff out apprehensive batsmen at a thousand paces and are invigorated by them. It wasn’t long before he edged a decent, though not devastating ball to fourth slip.

Another sign of a batsman’s faltering self belief is their fielding. Clarke, as good a slip fielder as there is, yesterday shelled Ian Bell on 21 as he shaped to cut. It went fast and slightly to his right but it was the kind of chance he usually gobbles. It was a miss indicative of a hesitant body and a troubled mind. He must find a remedy quickly, or the end is nigh.