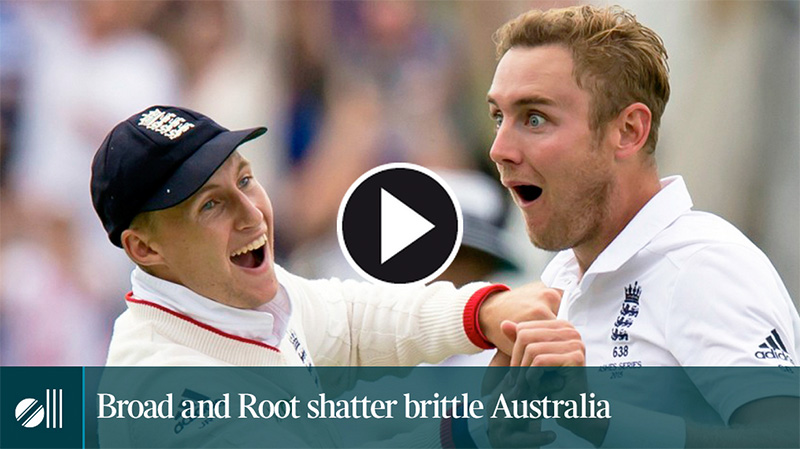 Not only did Australia demonstrate utterly inadequate technique in yesterday’s debacle. They betrayed extraordinary naivity. Despite their demise at Edgbaston and the obvious repeat of the conditions here at Trent Bridge, they completely failed to adapt. Infact, despite bolstering their top order with Shaun Marsh replacing his brother Mitchell, their batting was considerably worse. Some of the dismissals – Michael Clarke’s wild hack at Stuart Broad and Peter Nevill bowled through a gate as wide as a garage – were plain embarrassing. To be bowled out on that pitch in less than 20 overs was an insult to cricket.

There was much suspicious poking of the grassy, slightly cracked surface before play. The Australian batsmen must have known what to expect when England won the toss and elected to field. Persistent line and length bowling, some lateral movement with the new ball, both in the air and off the pitch, the odd bit of uneven bounce. Batting would require good judgement, selectivity and a soft touch to absorb the deviation and lift. Certainly not hard hands and a beligerant attitude. Most of all it required sensible thought and collective fight. There was none of either.

Chris Rogers, the one Australian batsman able – and willing – to tailor his method to the conditions, was gone to the third ball of the match. Facing Stuart Broad from round the wicket, Rogers was mindful of being dismissed twice lbw from that angle at Edgbaston. He played slightly inside the line – to avoid being hit on the pad – and edged to slip. The door was ajar.

Steve Smith, whose shuffling method always looked as if it might be susceptible to the moving ball, was squared up and caught behind. The two men who between them scored 388 runs in the first innings at Lord’s out in the first over. The door had burst open. After David Warner was slightly unlucky to be caught behind off an inside edge, Shaun Marsh pushed hard at a leaveable delivery from Broad and egded to slip and Adam Voges did exactly the same an over later. The score was 21-5.

Australians are brought up on hard, flat pitches with even bounce. The Kookaburra ball, with its low seam, does not deviate much. You can play the ball infront of your body, hitting it ‘early’ at the top of its bounce. A sharp eye is more important than good footwork. Because of the movement available in England with higher-seamed Dukes ball, shots need to be played later, alongside the body. That way the deviation can be accounted for and edges are less likely to carry, and anything off line can be left alone.

The ‘leave’ wasn’t in the Australians vocabulary yesterday. They went after everything. England devised a plan for each batsman, which Broad applied with forensic precision. Like lemmings they toppled over the cliff. Broad was brilliant, and so was England’s slip catching, but Joe Root’s batting in the afternoon was as outstanding as Australia’s was abysmal.