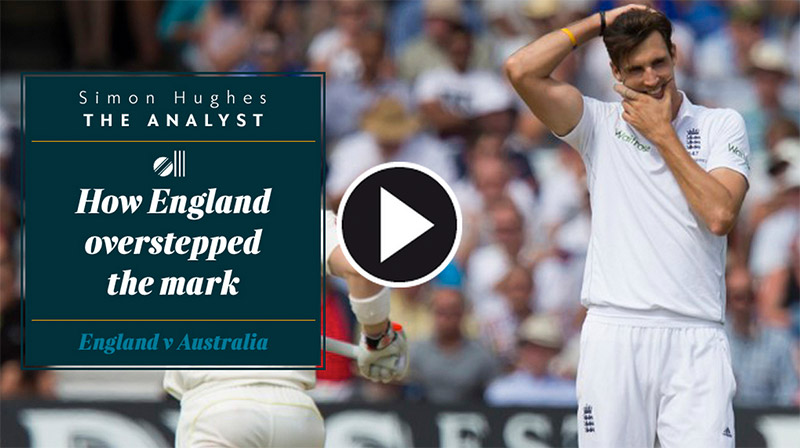 You need 20 wickets to win a test match. Or if you are England in this game make that 22. Two Australian batsmen were dismissed by no balls which, added to a couple of dropped catches yesterday, took the gloss off another highly skilled performance by England in the field. But for those indiscretions the Trent Bridge home dressing room would now be littered with empty champagne bottles.

Having examined Chris Rogers judgement from round the wicket after lunch, Mark Wood produced a vicious lifter which Rogers could only parry to third slip where Joe Root took one of a number of superb catches. Rogers made his way off until he was informed half way to the pavilion that Wood had marginally overstepped. Luckily for England Rogers added only another 5 runs before Ben Stokes snared him with a delicious outswinger, and another stunning Root catch.

An hour later, Steve Finn, in the middle of a probing spell of late outswing, induced a flying edge from Peter Nevill which was pouched by Alastair Cook. Again the third umpire ruled that he had overstepped and Nevill lived to fight again. It gave Australia a stay of execution, until Nevill shouldered arms to Stokes and was lbw.

Why, in this age of analysis, and meticulous attention to detail, and measuring run-ups with tape measures and spray paint to mark your starting point, do bowlers still no ball? Especially when they are penalized in one day cricket by a free hit. No balling is not now only a cardinal sin, but a potentially expensive one too.

As someone who once dismissed Geoff Boycott for nought with a no ball, and has suffered a verbal roasting ever since (it was the only time I ever got the b*****d out) I consider myself an authority on the subject. The answer is a combination of adrenaline, habit, and lack of discipline.

The ‘habit’ stems from the persistent tendency to bowl no balls in the nets. Most pace bowlers do so (although England bowling coach Otis Gibson often stands as a makeshift umpire in practice to make sure they don’t.) Over time this conjures up a subconscious impression of where the stumps are as the bowler is running in. They know, in their minds eye, where their back foot take-off position is. It doesn’t matter where they begin the run-up from, their stride pattern will automatically adjust itself so they still take off into their delivery from the same spot. A bowler gets used to jumping from and landing in exactly the same place. It is hard to change. Disorientating.

Bowlers, the frequently unheralded labourers of cricket, invariably want to push their luck on the front line and get as close as possible to the batsman. It might just give them that crucial extra 3mph. It is, of course, utterly foolish. It only takes setting off slightly infront of their mark, or running in a fraction quicker in the excitement of having taken a wicket, to fractionally overstep. (Wood, infact, still marks out his run with paces rather than tape measures.) And whereas you might get away with a marginal infringement a decade ago, and a friendly umpire muttering ‘getting a bit tight lad!’ as you walk back, now the cameras miss nothing.

It is possible to conquer the habit, and Stokes – a regular transgressor last year – has done so. With hard work and attention to detail he now gives himself a bit of leeway on the front line. A comfortable, consistent run up is fundamental for a bowler to maintain control – especially of length – (James Anderson never oversteps.) The rewards were evident for Stokes yesterday as he produced a series of waspish, Anderson-like swingers – most on an enquiring length – to whip out five Australian batsmen.

It reflects well on the young all-rounder that he has applied himself to this discipline. Despite no runs, he has still – with his bowling and inspirational catching – had an important influence on this match. He is some cricketer.