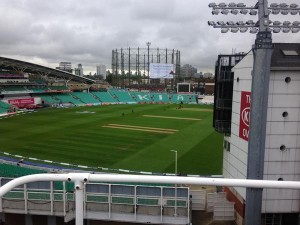 You can’t win a test in the first session, the saying goes, but you can certainly lose one. It is a theory that has been repetitively applied in this series. Look at the first day lunchtime scores in each game: at the first test in Cardiff England were 88-3 at lunch, Joe Root had been dropped on nought and they didn’t lose a fourth wicket til 196. At Lord’s Australia were 103-1 (and didn’t lose a fourth wicket til 426.) After 27 overs of Australia’s first effort at a rain-affected Edgbaston – the equivalent of the pre-lunch session – they were in complete disarray. At Trent Bridge their batting had already been dismantled and they were in the field.

Yesterday Australia were clearly determined to make England work for their pre-lunch wickets. Partly as a result of that there weren’t any. The ‘leave’ – a stroke not apparent in an Australian’s DNA up to this point – was suddenly popular. Bats were not drawn to wide balls like Koalas to Eucalyptus leaves. Manufacturers logos should have been stuck on upside down so often was the wood held aloft the wrong way round. Expectant slips fielders were soon more conscious of their rumbling tummies than likely edges. At lunch Australia were 82-0.

Chris Rogers a man who has spent half his professional playing life in England, was hell-bent on leaving every last morsel of resistance on the field. He shouldered arms to five of the match’s first six balls from Stuart Broad – angled in from round the wicket. The Australians had worked out that few of Broad’s deliveries target the stumps (11 % in total) and none of the nine wickets that he took at Trent Bridge. They knew that his height and the consistent, if spongy, bounce of the Oval pitch would ensure that anything short of a half volley would pass over the stumps. They could leave the ball on length as much as line.

Rogers made just four runs in the first hour – from 42 balls – and would not be drawn into an attacking shot until Ben Stokes let loose a wide, juicy half volley in the 15th over which he could truly have put away with a stick of rhubarb.

David Warner followed Rogers lead. Naturally a hunter, who likes to go shooting for his dinner, he was admirably restrained, looking to gather nourishment, accumulating runs when they were fed to him – a carnivore turned temporarily into a vegetarian. He adapted his game to England’s predominantly round the wicket attack, standing on offstump and disciplining himself not to play at anything he didn’t have to. He was decisive rather than hesitant in defence or attack and hit immaculately straight when the ball was full. Both men exhibited that very un-Australian trait of playing with soft hands to ensure the edges, when they were taken, didn’t carry.

The England bowling was as probing and disciplined as at Trent Bridge, but there was negligible movement and no sacrificial Australians, and as a result a well balanced contest is in prospect.

Warner pulling the ball – early paddle pull off Wood? Then went for the full blown version – off Finn and off Stokes. Looks better. (been out twice playing the half pull.)