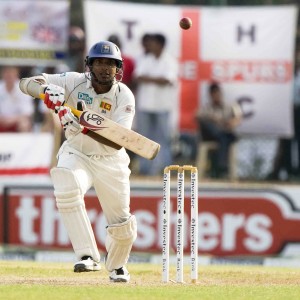 Two 37 year olds will play their last test match this week. Two left handers playing for two different countries on opposite sides of the world bonded by one mission: to achieve their Masters in batsmanship. Chris Rogers and Kumar Sangakkara have, with their thorough research and meticulous preparation and forensic attention to detail, made batting more a science than an art.

Both have proved in the last 12 months that you can tailor your game to different conditions, even at their venerable age, and illustrated that it is not only important but vital to do so in England. Both have adapted their methods to defy waspish English swing and seam, inadvertently highlighting the one-dimensional approaches of their lauded teammates. They are the antithesis of the modern batsman – epitomized by Kevin Pietersen – who justify a failure to an ill-judged shot by announcing ‘It’s the way I play.’

Rogers is Australia’s unexpected leading run-scorer in this series (with 443.). But perhaps it is not so surprising. He has spent more than a decade immersing himself in English conditions, first with clubs in Devon and the Midlands, later with four different counties. ‘You have to play differently here. You tend to get bowled, lbw, and caught behind more than on the more trustworthy Australian pitches. When the ball is moving you have to play it right under your nose, as late as possible to allow for the sideways movement. But you can use the angles that movement provides. I remember seeing a fantastic hundred by Rahul Dravid at Lords [in 2011.] The ball was seaming and swinging and he played immaculately. He scored a lot of runs square and behind square on the offside, letting the ball come to him.’ Dravid was undefeated on 103 as India were bowled out for 286.

Rogers agrees, however, that the defining example of how to bat in England was provided by Sangakkara in a test match last summer at Lord’s. Especially as Sangakkara has scored more international runs this century – 27,966 in all formats – than anyone else, I went to his home in Kandy earlier this year to interview him for my book Who Wants to be a Batsman? I wanted to ask him about that innings.

Like everything Sangakkara does, it was scrupulously planned. Sri Lanka were playing two Tests against England in early June. Sangakkara had a relatively modest record in England – an average of 30 and no hundred at Lord’s – and he wanted to put that right – for himself and the team. He arranged to play for Durham in the County Championship, purely to get accustomed to English conditions before the Tests. After that and a series of one-day internationals – 12 innings in total during which he averaged 60 – he was ready.

‘In England I had closed up my stance a lot,’ he said. ‘I didn’t tap the bat too much in the crease, because it drives my hands away from my body and you need to be a bit more restricted in England because of the swinging ball. I changed my back- and-across movement to almost nothing. That allowed me to see the line of the ball a lot quicker and a lot better, especially when I was facing a guy like Jimmy Anderson who swung it both ways. I needed to stay side-on to allow for him trying to open me up with the one that goes across me. In England you don’t need to play straight like people say. Because of the swing, you’re more likely to be playing between mid-off and cover. A lot squarer of the wicket, going with the swing of the ball.’

He had endlessly rehearsed every detail of that innings and there was a beautiful compactness to his batting. His positioning was superb. His defence was impregnable, the ball repelled right under his eyes, played as late as possible, the bat exactly perpendicular and perfectly aligned with his body.

His judgement was faultless. He left anything four inches wide. He played shots, either the push or the drive with a vertical bat or the pull and the cut with a horizontal bat. There was nothing half-hearted. The ball was placed in the gap with a mathematician’s precision. He made 147 with not a single mistake until he was out.   This was a century immaculately conceived and impeccably constructed.

Rogers and Sangakkara undertake their final batting examinations this week. But both have already passed their Masters with distinction.