Barbados: a special place in the sun 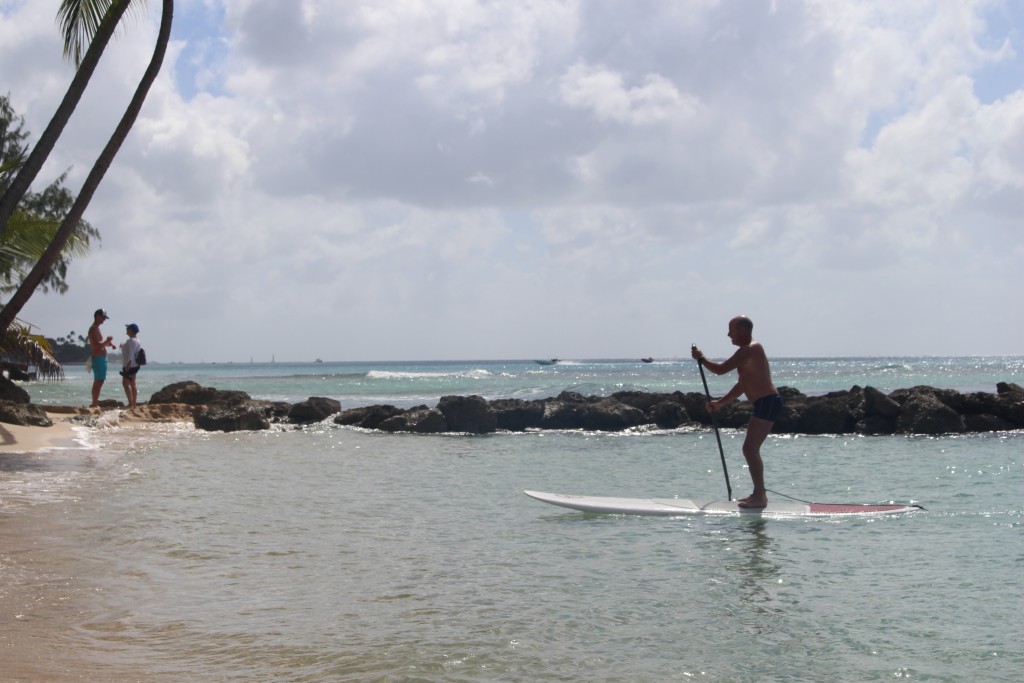 Barbados was once famous for the three “W”s: Frank Worrell, Everton Weekes and Clyde Walcott, the fabulous 1950s cricketers. More recently, the three “R”s have taken over: relaxation, rum and rib ticklers.

It is where the hammock was discovered and cricketers past and present come here to temporarily banish the stresses of life – despite their harrowing experiences on the field, where Barbadian fast bowlers have long served an unrelenting diet of searing deliveries into a visiting batsman’s ribcage.

From the days of the first England cricket tours to Barbados in the late 19th century, and particularly since England’s first test in the West Indies, which was played in Barbados in 1930, increasing numbers of Britons have sought winter refuge on the island. Back then, it was a two week voyage from Southampton followed by a stay in the Marine Hotel Hastings, or the Crane Hotel, and a ball at Queen’s House, before making the long journey home alongside precious cargo of rum, tobacco, cotton and sugar.

When Barbados celebrated independence in 1966, tourism was just beginning to challenge sugar cane as the mainstay of the economy, helped by the opening of the Sandy Lane hotel▼ in 1961. The resort in St James quickly became a magnet for the jet set as everyone from Maria Callas and T S Eliot to Jacqueline Kennedy and Aristotle Onassis checked in.Before long package holiday companies began adding the Caribbean island to their ever-expanding brochures and new luxury hotels were popping up along what would be later dubbed the “Platinum Coast”.Barbados moved even closer for Britons – at least, those with deep pockets – when Concorde first touched down in 1977 to great fanfare (before whisking the visiting Queen Elizabeth home on the four-hour flight to London). One of the few remaining Concordes has been given its final resting place on the island.These days, the flight is still relatively short (8 hours) and visitors go for the perfect climate – not too hot, just right – the balmy, tranquil sea, the good food and the easy-going people who all speak English, love cricket and drive on the left. (Except for the odd wayward bus, anyway.) 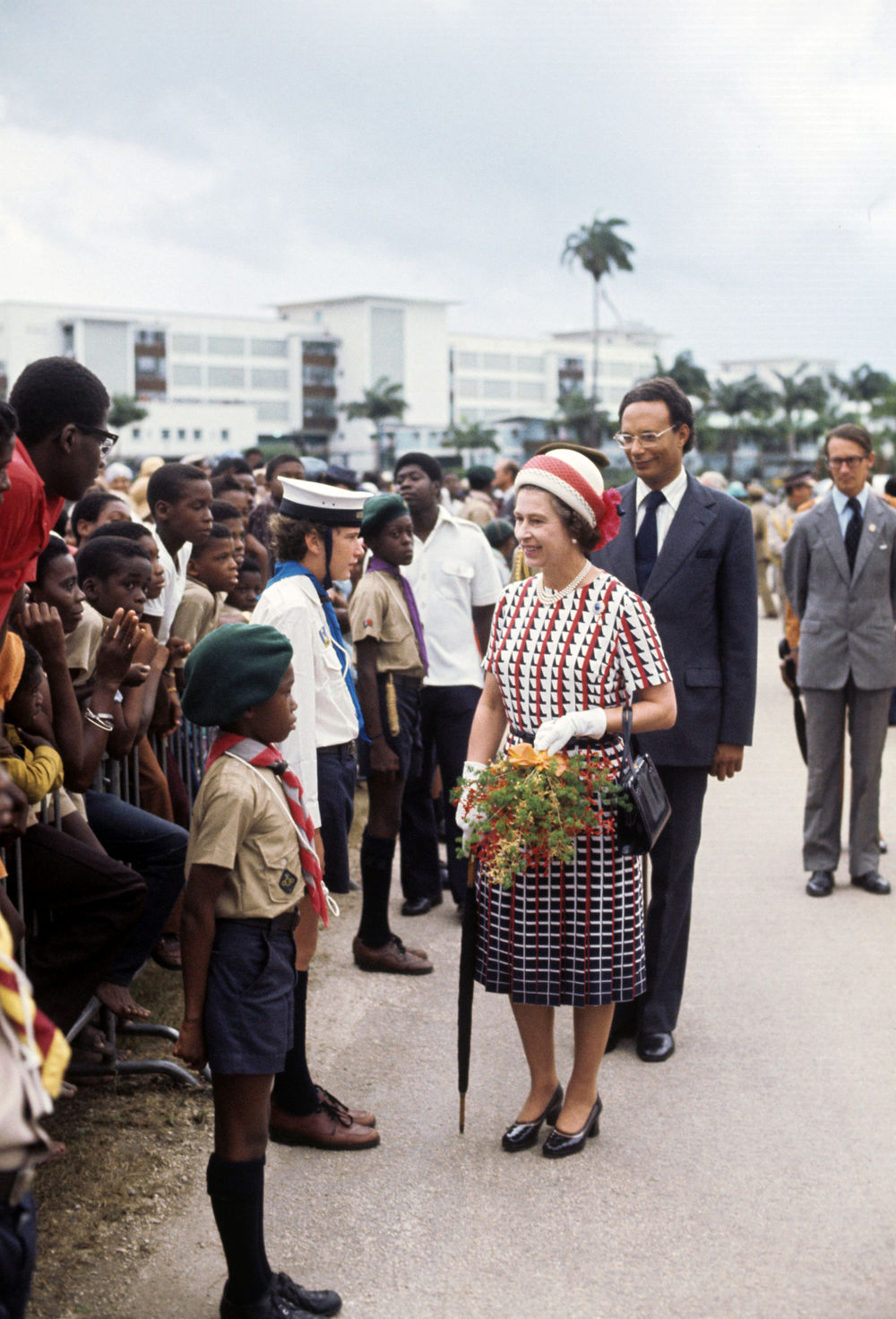 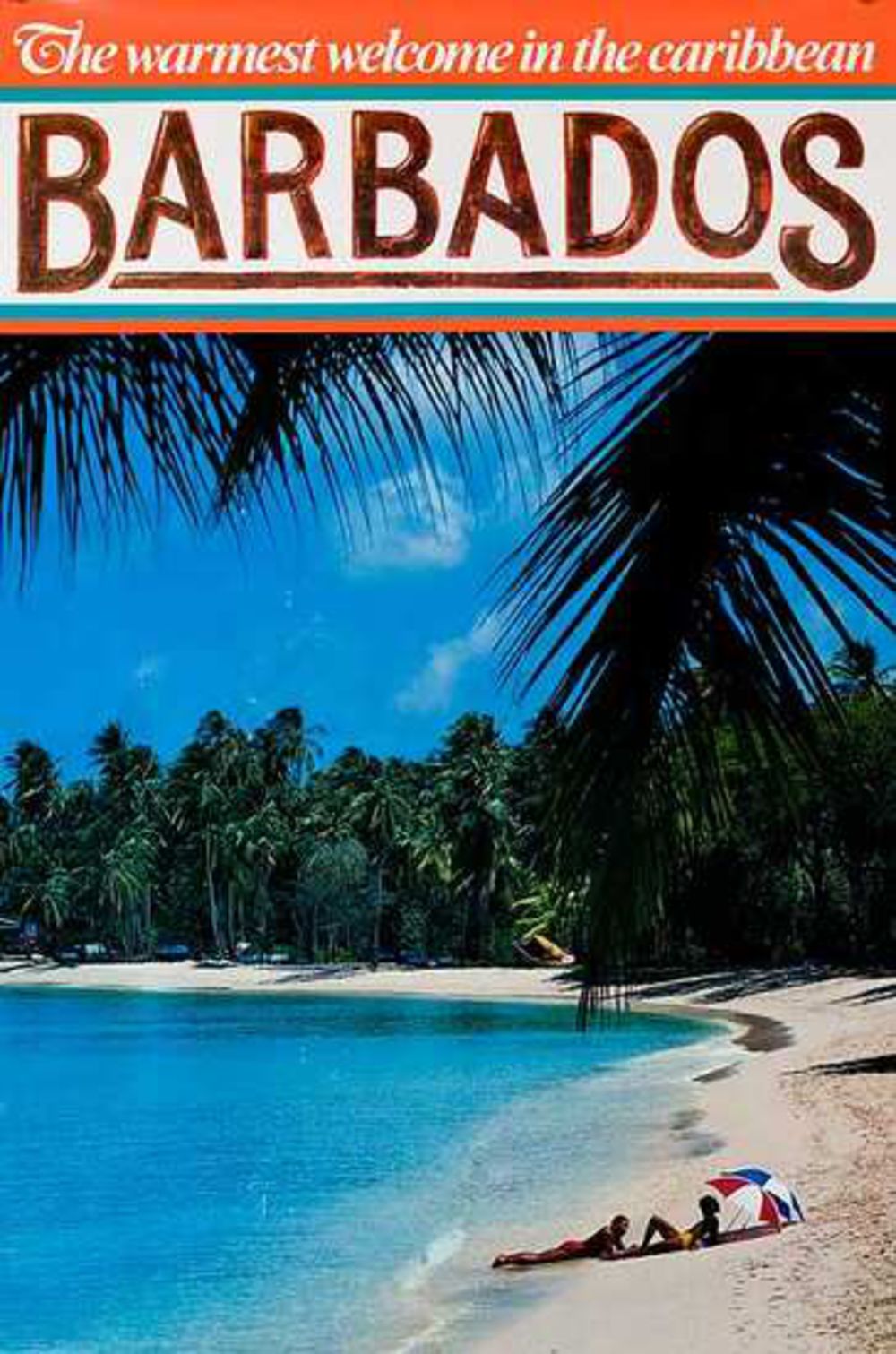 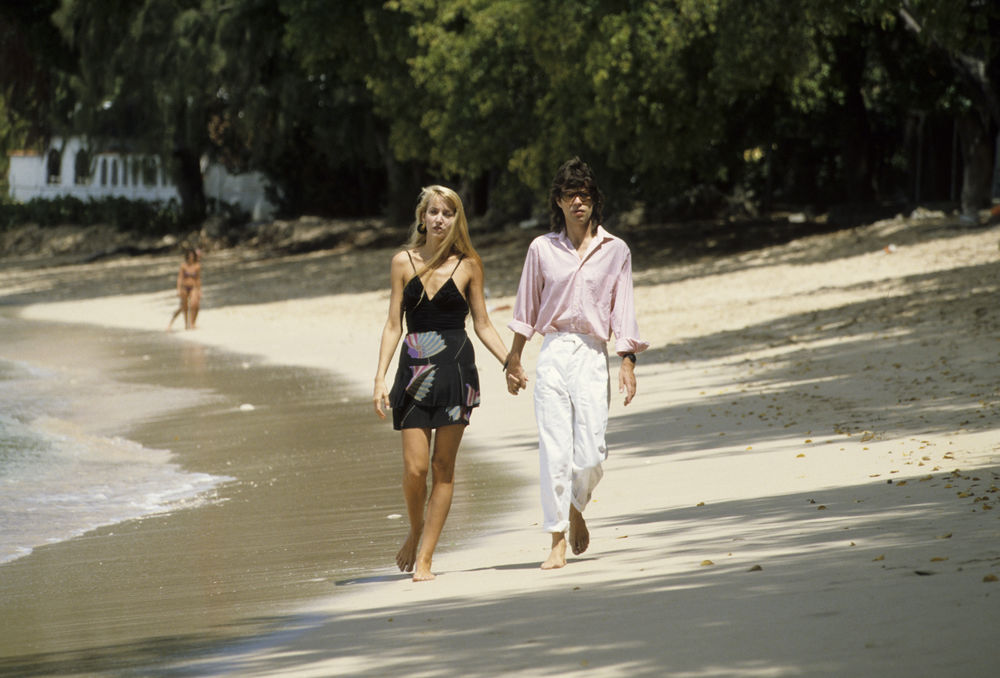 On my first visit in 1987 I was struck by their enthusiasm for the game – including an ability to argue about it for hours. The players I met, such as Collis King and Malcolm Marshall, had a natural exuberance both on and off the field.Former England captains Mike Gatting, Michael Atherton and Nasser Hussain were all on the island when I visited again in December. Atherton, who met his longtime partner, Isabelle, in the Caribbean, spends every holiday there.The main west coast road is littered with pretty, sheltered beaches▼, small, friendly hotels and ramshackle beach bars. Nothing, not even the opposite coast, is very far away. Locals linger in the shade watching the world drift by or playing dominoes in rum shacks. The time, the day, the month, seems largely immaterial. “Liming” (chilling out) is a way of life, and it is infectious.
And yet put a cricket bat or a ball in his hand and a Bajan is a different species. Their batting and fast bowling prowess is extraordinary and they only know one word: attack. Ten of the fifty greatest cricketers who ever lived came from Barbados, amongst them the phenomenal all-rounder Garry Sobers, the deadly-fast Malcolm Marshall, the goliath Joel Garner and the peerless opening pair of Gordon Greenidge and Desmond Haynes. In all, the island has produced 75 test players. That’s 75 more than the Isle of Wight, which is roughly the same size.The first English side to visit Barbados arrived in 1895. RS Lucas’s English tourists, a mixture of county players and amateurs, sailed early January. Facing a Barbadian team of white batsmen and black bowlers, they opted to bat in the first match. “The wicket though had apparently been watered overnight and played very badly at first,” reports Cricket magazine on 28 Feb 1895, and they were dismissed for 48. The heat was “oppressive, the temperature reaching 130 degrees (F) in the sun and the glare naturally had its effect on the fielding of the English team.” They lost by five wickets.Few England sides have fared better on the island since. Michael Holding’s humiliation of the indomitable Geoff Boycott at Bridgetown in 1981 – forcing him to hurriedly flinch and weave before shattering his wicket for a six ball duck – symbolised England’s general misery in Barbados. They have the chance to amend their appalling record when they play a test there on May 1st.
From the mid 1970s onwards Barbados was a fast bowling conveyor belt, supplying English county cricket with a sequence of fearsome pacemen starting with Garner and then Marshall and including the colossi Wayne Daniel and Sylvester Clarke, Franklyn Stephenson, Ezra Moseley, George Ferris and various others. The sound of a toilet flushing was usually audible in the dressing room before an Englishman faced any of these men.Many Bajan cricketers learned to bowl on the beach, honing their actions by skimming a hairless tennis ball off the sheet of water left by a receding wave. It is where their batsmen also acquired their fearlessness and lightning reactions.Numerous celebrities were drawn to Barbados during the heyday of West Indies cricket. Mick Jagger and Elton John were regular visitors, attracted by the sport, the relaxed lifestyle and the fact that the luxury yacht of Sir John Paul Getty, philanthropist and cricket fanatic, was often moored just off shore.Barbados’s supreme players were unified by two things – a healthy outdoor lifestyle and a love of rum▼ – and they were rarely injured. Perhaps there’s something in that. The towering Garner, 6ft 8in, known universally as Big Bird, was brought up on the southern coast at Enterprise. 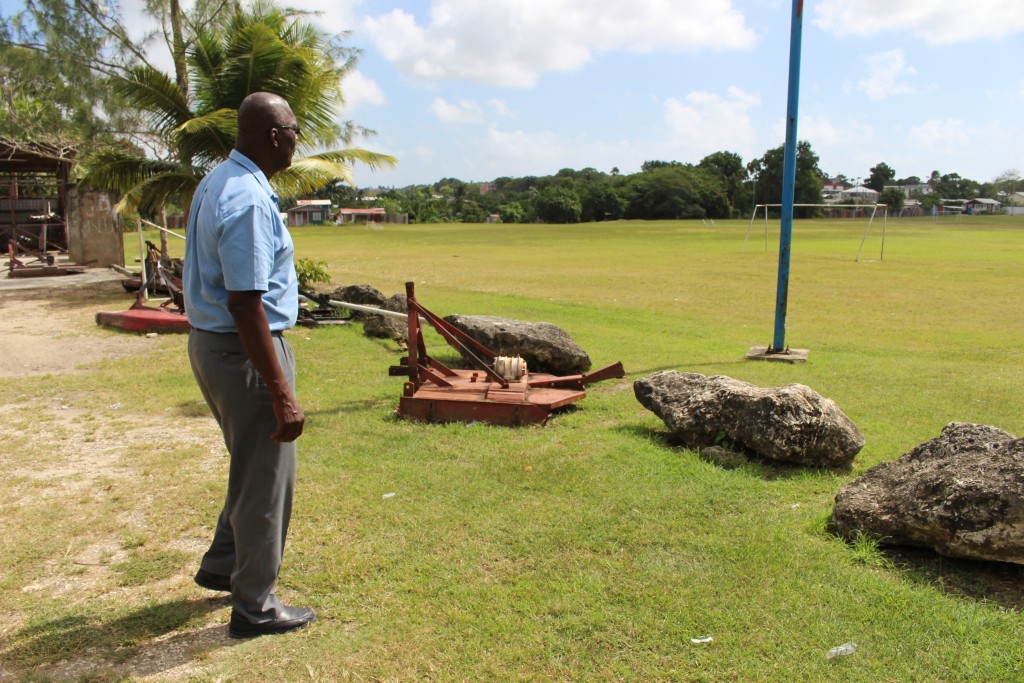 The Big Bird surveys his world

Their routine rarely involved much sleep. Garner typically needed only four hours. Even before his famous demolition of England in the 1979 World Cup final at Lord’s (he took 5-38), he had been up drinking until the small hours.Later, I meet Garfield Sobers in the verdant surroundings of the Sandy Lane golf▼ club. He tells me about the time he put on 399 with Frank Worrell in Bridgetown against England. The partnership spanned three days’ play. “Frank and I were rooming together at the Marine Hotel and I would wait at the bar til two or three o’clock in the morning until Frank got in. Then we’d have a drink and go to bed about four. If he got in before me, he’d wait for me. It never worked for me going to bed at, say, 10 o’clock. The thought of [England’s] Trueman and Statham bowling at me kept me awake all night. If I went to bed late, I slept and I forgot all about cricket until I arrived at the ground.” 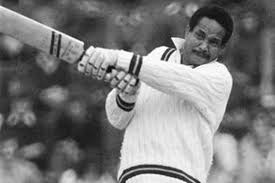 Sobers is 77 years old now but still fit and ultra-competitive and practically lives at Sandy Lane, where he plays most days. “We don’t play match play, we play medal. You can’t just pick up the ball if you go out of bounds. It means every shot counts. We don’t play for a lot of money. More for the bragging rights,” he smiles.Just before New Year, Desmond Haynes was locked into a three day golfing duel with his old test match opponent (and Middlesex colleague) Mike Gatting, at the Royal Westmoreland golf club, where Gatting has a house. Sitting in the bar, Haynes was cursing the English handicap system that allows Gatting to play off 10 – “you can’t just make up a handicap! He should be playing off six!”“Barbados has some of the toughest par threes in the world,” he says. “Some golfers are intimidated by having to drive over ravines and water hazards. I love it. I opened the batting and there’s nothing worse than a bloke bowling at 100mph trying to hit you in the head! No golf course is going to worry me after that.” I leave him holding court in the bar as darkness closes in.
Happily, Barbados has moved on. The Jolly Roger still exists but has been superseded by a range of sleek catamarans that take small groups out from Bridgetown wharf to selected snorkeling sites along the west coast. With Cool Runnings we sailed smoothly to a sheltered spot where we entered the water down a shallow staircase to swim with large turtles and shoals of tropical fish darting about a reef. We anchored 200 yards off the beach – just in sight of the singer Rihanna’s large beachfront complex – for a superb lunch of barbequed fish, marinated chicken and salads accompanied by good wine and rum cocktails before a leisurely cruise back to port. The trip sufficiently impressed Tony and Cherie Blair that they been back five times.Lone Star, a swanky restaurant▼ near up-market Holetown, is the preferred choice for many ex-England players, notably Michael Vaughan. Simon Cowell, who is said to have seven properties on the island, ate there the night before we did.A smaller, more causal alternative is Bombas, which is close to the popular Mullins Beach bar (another Vaughan favourite) and does an outstanding blackened Kingfish salad. Mike Gatting, who famously had part of his nose removed by a delivery from Marshall, prefers Lobster Alive, on the south coast. “It’s only a little shack on the beach but the lobster is brought in fresh from the Grenadines every day and you pick your own. Sometimes there’s a jazz band playing.”
Garner passes the time playing dominoes – “I play all day and I never get bored!” – either at Earner Blackman’s rum shop or, every Friday night, at Oistins Fish fry. Oistins is a wonderfully chaotic array of food stalls where seafood is barbequed, Calypso bands roam around and locals shake their booty.The South coast is also where you will find Atherton, watching his kids body board at the lively Accra beach during the day and jogging along the boardwalk towards Bridgetown in the early evening.The further east you go round the coast, the bigger the waves get. Once you get to the stunning Crane Beach, they can knock you over. Smashing into the wild expanses of Bathsheba they are only fit for the accomplished surfer. Looking at the raging sea from the cliffs above Bathsheba or Cattlewash makes a spectacular contrast from reclining beside the waters gently lapping the west coast.  It’s a contrast that encapsulates Barbados for cricketers. It’s a lovely, hospitable, restorative place for a holiday. But facing their fast bowlers is another story.