A run-maker as relentless as the sea at Lowestoft 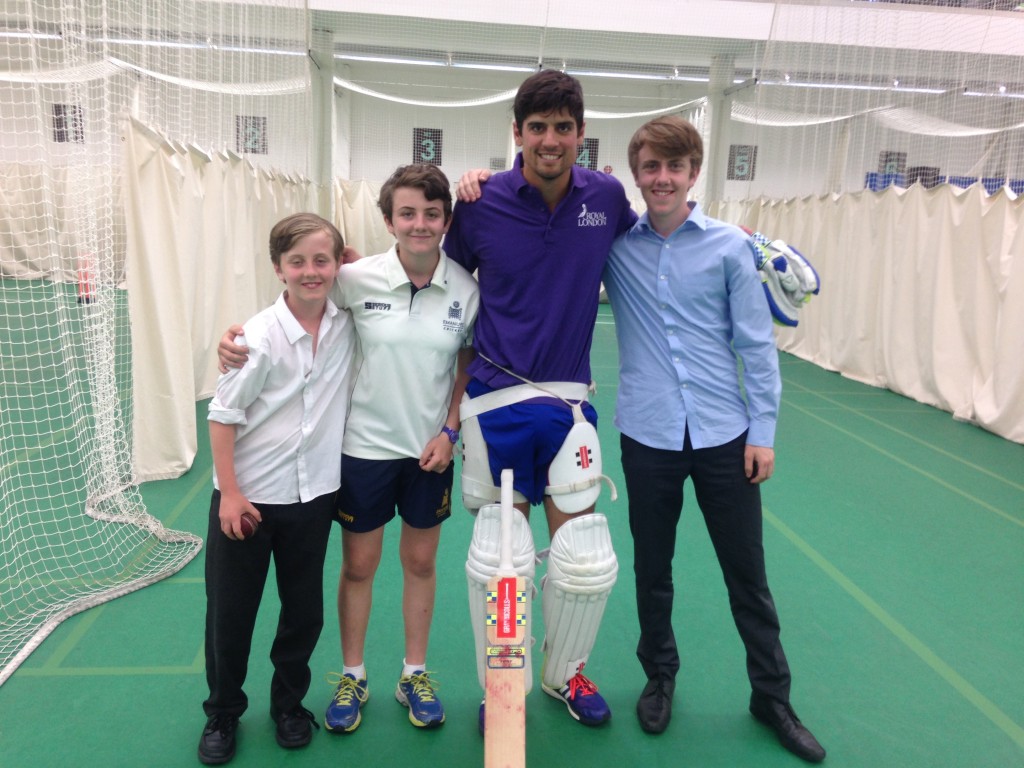 Alastair Cook after a net with the Hughes family…

It is just over ten years since Alastair Cook made his test debut. Cricket has evolved substantially in that time. Switch hits and ramp shots and doosras and carom balls have been developed, most largely as a result of the rapid advance of T20. Scoring rates have gone through the roof. Bats are like railway sleepers. Sixes mount up like frequent flyer points. And yet, amidst all that Cook remains the same. His unobtrusive method of accumulating runs is almost identical now to the 21 year old who flew in to Nagpur at the 11th hour (to replace the stressed-out Marcus Trescothick) to make a hundred on debut. His manner – modest, understated – is also the same. He does not have a beard or the name of his daughter tattooed on his arm. He even still has a full head of hair, unlike most of his predecessors after a few years as England captain.

Cook’s run-making is as relentless as the sea at Lowestoft. There are no pounding waves in his stroke play, but he makes constant ripples. His presence at the wicket creates a perpetual undercurrent. You might place rocks in his way, but he will inevitably find a route round them. The tide may recede for a while, but it will inevitably return nudging at the shore again.

There is nothing exceptional about his shots – essentially the poke through mid wicket, the back cut and the swivel pull. All are played smoothly, efficiently, with an unerring eye but little flamboyance. He coaxes rather than clubs the ball to the boundary. He has never felt the need to be ostentatious or experimental.

What IS exceptional is his concentration and his desire. He is unflappable, insatiable. He has perfected the art of turning down the focus between balls – what sports psychologists call ‘locating the dimmer switch’ – and turning it up again as the bowler begins his run up. ‘I like to let my mind wander between balls,’ he says. ‘It’s not a deliberate thing. I just let my mind think what it wants to think.’

This is as important after a day’s play as much as during it. He is not one to be poring over his innings at night. Have dinner with him in the evening and he is more likely to be discussing farming than batting. Some prolific run-makers are totally myopic, as with their batting they will never submit in an argument. Cook is unconfrontational, happy to listen to an alternative view.  Even if he has made no runs, he is the most relaxed and affable dining companion.

Hidden behind the placid facade is an iron will. In areas that he can control he does not like to be beaten. Aside from his 10,000 runs and his overseas test series wins, the record of which he is proudest is being Englands undisputed champion of the yo-yo test.  The successor to the dreaded bleep test, this is a gruelling sequence of 20m sprints that continue between intermittent signals until you drop. In 11 seasons as an England player Cook has never been beaten. His endurance capabilities are on a par wth Olympic athletes. Except after long days in the field he will do a 5km run on a treadmill during which he tries to maintain a speed of 20 kph (13mph.) This is the root of his indefatigability and his exceptional reliability. He is never injured. He has played in 126 successive tests. Only one man in history has played more – Allan Border with 153.

There are similarities between the two, beyond their left-handedness and their unspectacular approach. Both are loyal, honourable, straightforward men. Both are committed, determined, occasionally stubborn on the field, but relaxed and ready to laugh off it. Neither expect preferential treatment or garlands. Both are happy to get down and dirty.

It is well known that Cook never sweats. He can bat for a whole day in one pair of gloves. Perhaps this is a mental as much as physical thing. No stress equals no perspiration. He is not a worrier, though ironically, he did fret about this 10,000 run landmark and it took him 4 innings to get the final 51 runs. Now that he is there who would bet against him getting a hundred at Lord’s? In that same unobtrusive, old fashioned way….