Cricket’s Greatest Rivalry: A History of the Ashes in 10 Matches 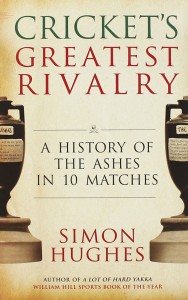 No other sport has a fixture like the Ashes. From the early 1880s the rivalry between these two great sporting nations has captured the public imagination and made sporting legends of its stars. Commentator, analyst and award-winning cricket historian Simon Hughes tells the story of the ten seminal series that have become the stuff of sporting folklore. Cricket’s Greatest Rivalry places you right at the heart of the action of each pivotal match, explaining the social context of the time, the atmosphere of the crowd and the background and temperaments of the players that battled in both baggy green and blue caps…Read more