NON STOP TO PERTH AND BACK 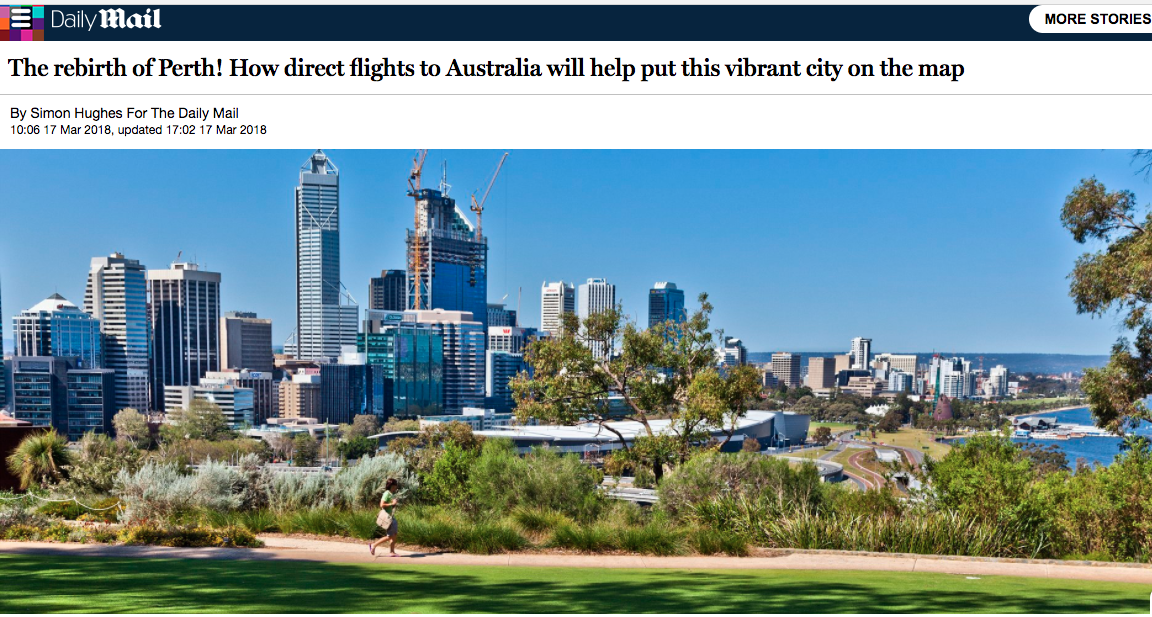 The best programme on Australian TV is the weather forecast. An impossibly tanned presenter in a floral shirt flashes his bleached-teeth smile at the camera and waves his hand airly about a map of the huge land mass with barely a cloud or an occluded front on it. ‘It’s a beaut in Adelaide today!’ he exclaims and slaps the word BEAUT across the south coast. ‘It’s gonna be a bottler in Alice Springs,’ he continues, sticking BOTTLER in the centre of the country – Aussie slang for muggy. ‘And in Perth today’s a bonza!’

Infact every day in Perth is a ‘bonza’ (interchangeable with ‘beaut.’) Sunshine in Western Australia is as inevitable as drizzle in Leeds. Perth averages nine hours sun daily. It’s why so many Yorkshire folk have moved there. There’s even a Scarborough beach (though you can’t buy chips ‘n mushy peas or a stick of rock there.) The temperature does sometimes climb to 40 degrees (‘Scorchio!’ proclaims the weather guy) but the Fremantle Doctor usually calls from the south west by lunchtime to cool it all down.

Two things have prevented Perth being a realistic winter sun destination from the UK. First, it took too long to get to, and second once you’d been blown off the beach after lunch a couple of times there was nothing else to do except go and get drunk listening to a terrible band playing Eric Clapton covers. That’s all changed. Direct Qantas flights begin in mid March meaning after a couple of movies and a night’s upright kip you’re there. And Perth has had a makeover. The old joke about a carton of yoghurt having more live culture isn’t justified any more.

With the lavish Elizabeth Quay development on the city’s river shore, the seaside has come to town. There’s a beach, a water park, a suspension bridge, outdoor restaurants and bars literally over the road from your central hotel, finally connecting the majestic sweep of the Swan River to the skyscraper glitz of the city. You can practically fall into one of the river (and sea) cruises setting off every ten minutes from the jetty. Five minutes walk the other way they have buried the seedy Northbridge railway hub underground creating a buzzing neighbourhood of funky shops, galleries, hotels and restaurants.

When I lived in Perth in the 1980s, the only way to get around was in a gas-guzzling 4-litre Falcon which often required bump starting. When I was there in December, a hotel pushbike was all I needed. From the main street, Adelaide Terrace, I rode straight on to the dedicated riverside cycle-path and immediately passed a succession of river beaches with egg-timer sand and kayaks for hire and big grassy areas for a shady lunch. I passed kids taking camel rides along the river bank. Cycle routes of different lengths are regularly signposted. Half an hour’s easy ride from the centre I was relaxing on the sundeck of a quiet café at treelined Matilda Bay, watching a large pelican surveying a family and their dog frollick in the calm, shallow water and a man paddle-boarding towards Royal Perth yacht club, the city towers a gleaming speck across the Swan basin.

My reverie was broken by a large man, with, in local lingo ‘an awning over the toy factory‘ (a beer gut) looking up from the backpage headline in The Australian ‘Beer soaked Brits turning Ashes tour into a booze cruise’ and asking ‘Can any of you poms actually play cricket?’ ‘Well no,’ I said, ‘but at least we eat healthily.’

That’s changed too. Where your Perth diet used to be confined to the Great Aussie Meat Pie or All You Can Eat For $10 buffets, there is now an array of seafront restaurants with creative fish dishes (the Cottesloe Hotel, Barchetta, the Shoreline at Swanbourne) or trendy Asian eateries in town serving tasty morsels in a banana leaf. The Scandinavian-style Alex hotel – complete with late night honesty bar – is surrounded by cool restaurants in one of which – Sauma – we ate excellent Indian street food on benches alongside the retired editor of The Observer and other discerning Fleet Street types. Perth, once a byword for flashy superficiality, has acquired a bit of class.

The other thing you must do in Perth is a day trip to Rottnest island. It’s a 90 minute boat ride from the city centre (or 45 mins from Fremantle.) Take the hotel bike. Cycle around (there are no cars) and find yourself an (almost) private bay for a few hours (there’s 63 to choose from.) You can camp overnight but I wouldn’t advise it. Those ‘divine’ little Quokkas – guinea pig sized marsupials that everyone wants a selfie with – will chew through your guy ropes and steal your food. So get back and have dinner in town. And you’ll have a bonza time.