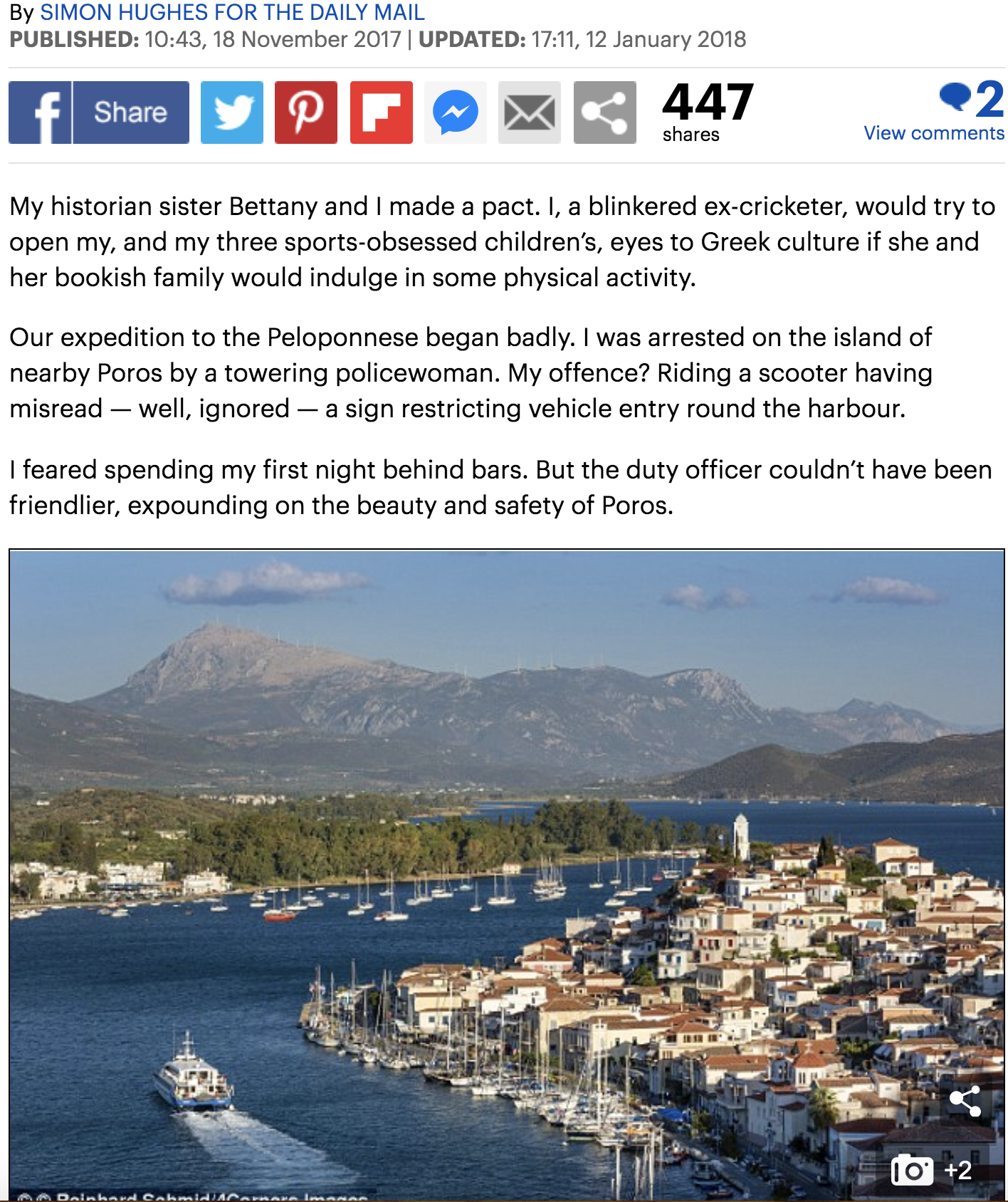 My historian sister Bettany and I had made a holiday pact. I, a blinkered ex-sportsman, would try to open my eyes to Greek culture if she would indulge in some physical activity.  But our expedition to the Peloponnese began badly. I was arrested on the laid-back island of Poros by a towering policewoman for riding a scooter (with two of my kids on the back) having overlooked a sign restricting vehicle entry round the harbour at night. Escorted up a small alley to the police station I feared spending my first night in Greece behind bars. But the duty officer couldn’t have been friendlier, expounding on the beauty and safety of Poros and it’s crime-free reputation. ‘I accidentally left the key in my motor cycle for two days and no one took it,’ he said. He still gave me a ticket though.

He was right about the island. Never mind the physical beauty it was the care and attention of the locals that really impressed us, The yacht we’d hoped to sleep on for a couple of nights was booked at the last minute by one of the visiting glitterati with deeper pockets, but the islanders immediately found us excellent hotel rooms on the waterfront allowing us to window-shop the super yachts berthed for the night. They threw in free water-skiing lessons and paddle-boarding. We even dragged Bettany away from reviewing Orhan Pamuk’s latest work for a mad ride on the’ banana’.

Around town there was a wonderful generosity of spirit – unordered speciality dishes brought to the table for no charge, even complimentary fuel for my errant scooter. Our teenagers couldn’t avoid the sight of Greek kids taking their ageing relatives out for an evening stroll. Don’t see that in west London do you?  With ten excellent beaches, a lively main town, and ferries making regular trips to other nearby islands, Poros is a good, affordable option for families, especially as you can get there on a flying dolphin from Athens in just over an hour. You don’t need a car. Just rent scooters or bikes. And check for no-entry signs.

We headed back to the mainland and up into the mountains of the Peloponnese. This is where Bettany comes into her own. She pointed out the bronze-age citadel of Argos and Greece’s first capital Napflion – and the homes of the legendary heroes Achilles, Agamemnon and Helen of Troy. We drove the path of the original marathon when, in 490 BC, the Greek soldier Pheidippides ran 250 miles to Sparta to ask for support against the Persian Army in the Battle of Marathon. That is how the famous long distance run got its name. There is fascinating history at every turn.

We passed decent-looking winter ski resorts and ascended to Levidi staying at the high-end-homely Villa Vader which looks out over the ancient battlefield of Mantineia. Here, in 418 BC, the Spartans defeated the Athenians.The sounds of barking dogs in the valley evoked the cries of war as the warriors headed into conflict. The valley is now the location of Greece’s rapidly emerging wine industry: a bottle of the Mantineia every bit as satisfying as a good New Zealand sauvignon.

Nikolas, the owner of the stylishly  refurbished Villa Vader, is a former stock exchange trader, and still knows where to get an adrenaline rush. He organised a rafting expedition down the Platonas River and then took us off-roading in an assortment of powerful quad-bikes and dune buggies. Careering around the narrow forest trails on a 2000m hillside definitely puts the Peloponnese on the exhilaration map. Callum (19) who only passed his driving test this summer, was instantly addicted.

We drove three hours south through Sparta, once home of the heroic ‘300’, a town dwarfed by the Taygetos mountains from which the Spartans reputedly cast off stunted or sickly offspring. The landscape becomes more rugged and barren as you reach the south coast and the dramatic rock of Monemvasia – the Gibraltar of Greece – to which clings a medieval town and fortress. Nearby is  the Kinsterna hotel – a superbly converted Byzantine mansion sprawling across the hillside. It has three excellent restaurants – one a traditional-style Taverna set amongst the trees – and two stunning infinity pools. Uniquely for Greece, the food here was outstanding: imaginative without being pretentious, satisfying all ages and palates. They even had gluten-free bread and pasta for my celiac-suffering niece. They make their own wine and olive oil and source the vegetables from the hotel’s kitchen garden. The hotel is family-owned and run by locals. It is completely informal and has a genuine warmth that you rarely find in five star establishments.

We took the free bikes down the 20 minute winding track to the simple beach club. the ride back up the hill in 35 degrees C was testing. We climbed to the ruined fort overlooking the hotel on horseback. The hotel’s launch took us out into the bay where we snorkelled in calm, clear waters in the shadow of Monemvasia’s rock fortress, virtually untouched for 600 years. A pair of giant sea turtles surfaced beside us on the way back adding to the sensation of timelessness.

It was the final act of a holiday  in which we had swum, waterskied, paddle-boarded, snorkelled, river-rafted, quad-biked, cycled, rode horses and scooters, done a virtual reality tour of the ancient world, and sampled the abiding hospitality – the ancient Xenia as my sister taught me –  of the Greeks. All eight of us felt enriched – body and soul.