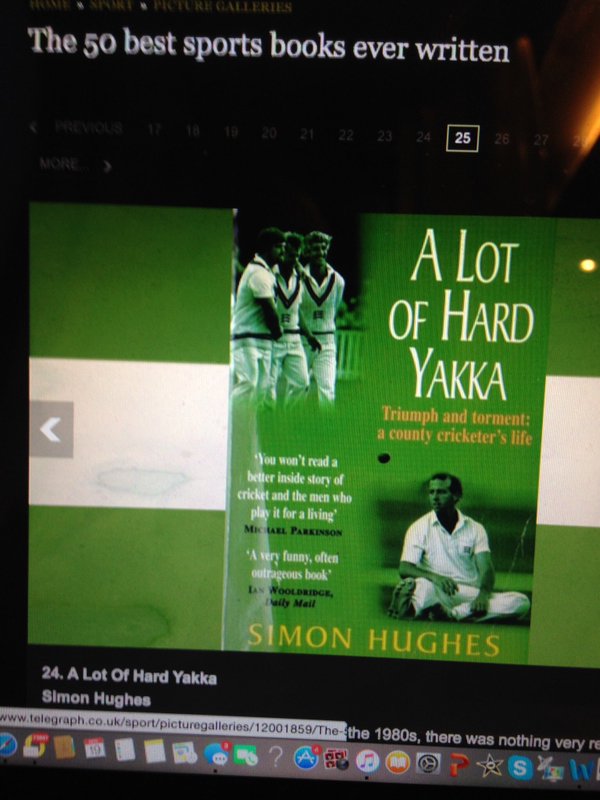 You can’t watch it during the coronavirus crisis, but you can certainly read about it; our chief cricket writer tips his sporting favourites

Stuck for something to read? Here are Mike Atherton’s favourite ten books about the sporting life.

A Handful of Summers by Gordon Forbes (1978)
These are dark times and we need some humour to keep us going. Gordon Forbes’s memoir about tennis during the last throes of the amateur age in the 1950s and 1960s is a delight. Beautifully written, wickedly funny (although some of the anecdotes might not necessarily get through a publisher these days), sharp in its observations and not too long, this will improve your mood instantly. A joyous read about people who played for fun.

A Lot of Hard Yakka by Simon Hughes (1997)
Not dissimilar in tone and style to the above, this book has Simon Hughes walking us through the delights and occasional futility of a career in the spit and sawdust surrounds of county cricket. Hughes was a journeyman (not meant disparagingly) seam bowler for Middlesex, and you can almost see him sitting in the corner of a dressing room populated by international stars, scribbling down his anecdotes with a wry smile while he awaits his turn for action.

The Boys of Summer by Roger Kahn (1972)
In this book, which takes its title from Dylan Thomas’s line “boys of summer in their ruin”, Roger Kahn, who died this winter, takes us back in time to the Brooklyn Dodgers of his youth and a shared love of baseball with his father. It then sets out to trace these heroes of yesteryear to find out what has become of them. Sentimental and elegiac in tone, it is a reminder that time waits for no one, not even Pee Wee Reese.

The Damned Utd by David Peace (2006)
Is fiction allowed in this list? Oh, go on then. David Peace’s account of Brian Clough’s tempestuous short managerial reign at Leeds United is brilliantly written. How far the details are truthful is open to question — Johnny Giles sued and maintained that many of the anecdotes in the book were fiction and duly received an apology — but there is no doubt that the novel captures something of the essence of professional and pressurised sport, with all the egos involved.

The Sweet Science by AJ Liebling (1956)
Joe Liebling once said that he could write better than anyone who was faster than him and faster than anyone who wrote better than him, the type of perfect line that is dotted through this account of his love affair with boxing in the golden age of the 1950s. You get the sense that Liebling had a lot of fun at the typewriter watching boxing, which, given his background as a decorated war reporter, is not surprising.

Mystery Spinner by Gideon Haigh (1999)
I’ve got to have one book from the best living cricket writer, Gideon Haigh, although I could have chosen more. This tale of the Australian mystery spinner Jack Iverson is typical Haigh: sniffing out a story previously untold, researching it meticulously and tirelessly, then writing it in spare and stylish prose. If you don’t read Haigh on cricket, you should; he’s the best. Harold Larwood by Duncan Hamilton (2009)
Harold Larwood, the working-class hero from Nottingham who propelled England to an Ashes triumph during the Bodyline tour of 1932-33, is one of the tragic figures of English cricket. Not that he saw things that way when I met him in his small bungalow in Sydney on the 1990-91 Ashes tour. After Bodyline he never played for England again, ran a sweet shop in Blackpool for a while before moving to Australia in 1949. The great fast bowler scandalously treated by the authorities receives due notice in Duncan Hamilton’s fine biography.

The Years of the Locust by Jon Hotten (2009)
When cricket blogging was in its infancy there was one site that stood out. It was called the Old Batsman, and time and again I’d read it and wonder who penned it, so good was the writing. Eventually I found out that the author’s name was Jon Hotten and so I looked for whatever else he had written. This nonfiction book, probably little known in the mainstream, about a murder with boxing as a backdrop, is well worth your time. Good writing will always win out.

Moneyball by Michael Lewis (2003)
It would be hard to argue against Michael Lewis as the best nonfiction writer now working. Here, as usual, he takes a topic that was in plain sight for everyone else, but overlooked: namely how a small baseball franchise took on their more financially powerful opponents through smarter use of statistics. Given the way sport has changed, it is probably the most influential sports book of the past 20 years.

The Professional by WC Heinz (1958)
I was searching for a last recommendation when I saw this book sitting next to my desk. WC Heinz was a great writer. If you have never read his newspaper article “Death of a Racehorse” then do so because it is the perfect illustration of how underwriting a story is better than overwriting it. Heinz was a war reporter — he co-wrote MASH, the novel on which M*A*S*H, the long-running TV series about the Korean War, was based — then a sports columnist. The Professional is his novel about boxing, based on his many encounters on the road. That Ernest Hemingway called it “the only good novel about a fighter I’ve ever read” and Elmore Leonard wrote the foreword tells you all you need to know.