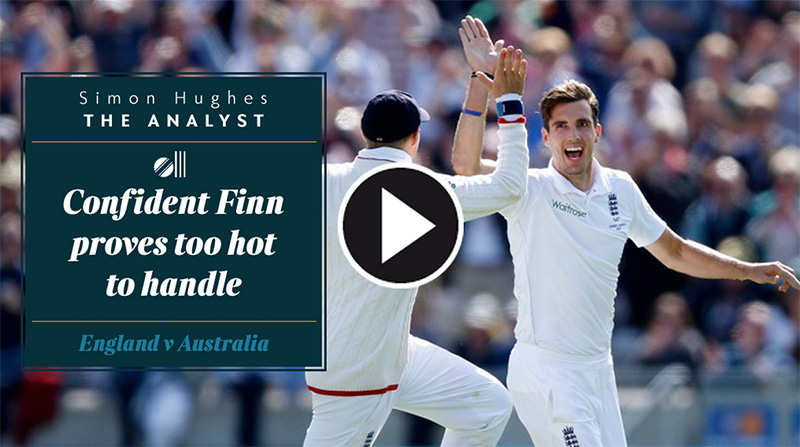 Steve Finn has always been a hot and cold bowler. He has spells where he is irresistible and spells where he is unusable. Brad Haddin took to him in his last test – at Trent Bridge in 2013 – and almost seized Australia victory. Yet Finn’s return of 3-13 in mid afternoon yesterday reduced Australia’s middle order to rubble for the second time in the match. He has an uncanny, and priceless knack of taking vital wickets – seven in this one including Steve Smith and Michael Clarke twice, at a combined cost (to England) of just 28 runs. He is their golden arm.

Rhythm is crucial to his performance. He generates his pace and venom from a smooth glide to the crease, a leap into delivery, a solid plant of the back foot and a rapid coil and uncoil of his lean upper body. Especially because he is 6ft 7in, it all requires extreme timing and co-ordination. More than most bowlers if any part of that mechanical operation is out of sync, his bowling goes awry.

Rhythm stems from confidence. From feeling relaxed and comfortable and in control. From believing rather than fearing. Tentative, apprehensive bowlers run in gingerly, thinking too much about foot positions and front arms and follow throughs. Finn had such acute problems, stemming from inadvertently clipping the stumps with his right knee three years ago – an irritation that became an epidemic – that it got to the stage where he could barely run in. Eventually he was suffering from the fast bowlers version of the yips. In such a state, you feel unsure which foot to set off with, reluctant to run in and terrified to let the ball go.

Finn has visited that private hell and escaped. With patience and understanding he has recovered his pace and penetration. The easy, fluid run up is back, the landing of the back foot safely away from the stumps, the upright position at the crease, wrist behind the ball, the lively pace and the enquiring line.

High speed, sometimes touching 94mph, in his first England incarnation, had set a difficult precedent. His return over the last few months has been dogged by pronouncements that he had lost his pace. Sometimes he tried too hard to prove otherwise. Infact he feels he has never been a genuine quick, but someone capable of slipping down the occasional quick ball.

That has characterized his bowling here. It started in Australia’s first innings with a perfect ball to Smith – good pace, insistent line, a hint of movement. Smith, the double centurion from Lord’s, edged obligingly to Alastair Cook. He followed it with the wicket of the beleagured Clarke, bowled by a straight half volley. It was the incision that began Australia’s disintegration.

Yesterday he started cold. David Warner took his first over for 14, with clips and cuts and a nonchalant pull. Cook removed him immediately. He resumed after a time from the pavilion end and immediately persuaded Smith into an injudicious pull resulting in a top edge and a simple catch. That brought in Clarke and Finn immediately rediscovered that easy flow to the crease. The pace increased with no apparent effort, the ball shaped dangerously away from the bat and carried through chest high to Jos Buttler. Within a few balls he had Clarke squared up and thick edging to fourth slip and Adam Voges prodding to second. A fuller delivery burst through Mitchell marsh’s crooked defence. He could have had Peter Nevill half a dozen times. He was too hot to handle. When Mitchell Johnson top edged the first ball of his second spell he had a five wicket haul for the first time since March 2013. It has been quite a return.